IDC Presents Our Round 37 “Spring” Solicitation

Independent Distribution Collective presents its 37th Solicitation just in time for placement for the spring season of 2011. We are excited about many of these new releases and are very proud to have a handful of legendary artists and bands joining IDC. Check out the overview of these new titles below, and feel free to visitour website anytime for more information on any of these artists or releases. IDC proudly welcomes these 9 new titles:

Foreign Legion “Night Moves” CD
Prozack Turner and Marc Stretch are Foreign Legion. Their debut album, KidnapperVan (along with DJ Design) broke new ground for underground hip-hop and tookplayful shots at the industry and art that spawned them. Several tours around theworld resulted in the party-driven Play Tight, soon after. The trio became a duo and next came The Secret Knock. An introspective, albeit brief, look into the minds oftwo musicians that still love the art of rhyme…

DJ Swamp “Vinyl Disciple” CD
DJ Swamp has announced the release of his new album “Vinyl Disciple” for release in spring 2011 through his own label Decadent Records. DJ SWAMP started as acompetition turntablist taking such esteemed titles as DMC United States Champion in 1996, his first year ever in the competition. For many years following DJ SWAMP toured as the dj for BECK. His acclaim has not ceased and the progression of his artistry has brought him alongside the likes of: Beck, Kid Rock, RL Burnside, The Crystal Method, Kool Keith, The Dust Brothers, and countless others, all of whom have called on his expertise for work on their studio tracks. 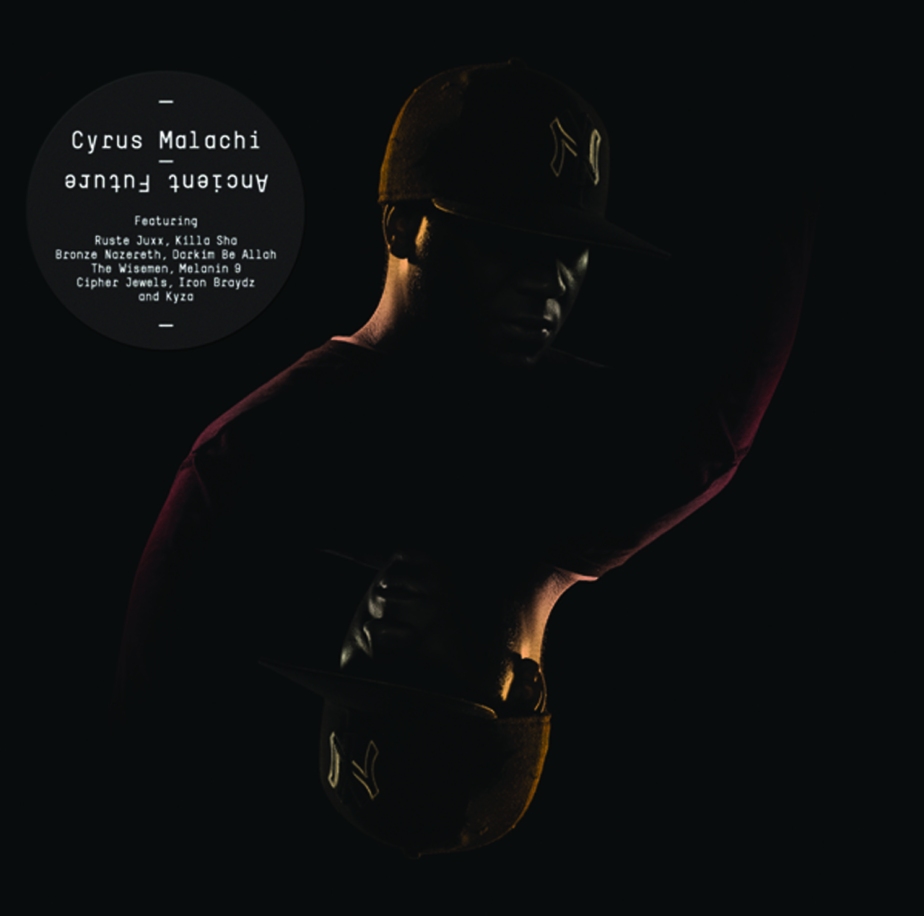 Cyrus Malachi “Ancient Future” CD
Cyrus Malachi burst onto the hip-hop scene with his crew – Triple Darkness, releasing their 2008 debut album ‘Anathema’, now in April 2011, after numerous group and guest appearances Malachi will release his debut album “AncientFuture” via No Cure Records. The album will set a new standard for lyricism inthe UK. “I have always been fascinated with language and words at differentstages in my life, I have really immersed myself in literature” says Cyrus whopromises “Ancient Future” to be a breathtaking album with intricate, emotive and thoughtprovoking lyrics.

Styles 1001 “The Solution” CD
A style 1001 is an up and coming contender in the world of hip-hop and othergenres of music production as well. He is self-taught, self-motivated, highly driven and determined to see this thing called “his dream” come into a reality. Once asked what a word of advice does he has for the up and coming artist like himself orsimply those interested in music production he replied. “Stay at it, continue to wantto learn more about every aspect of producing to harness your full potential”.

Curt Yagi “Close My Eyes” CD
Curt Yagi, San Francisco Bay Guardian’s “2008 Best of the Bay Singer-Songwriter” proudly announces the release of his second full-length studio album, “Close MyEyes,” April 12th, 2011. On all nine original and richly produced “Close My Eyes”tracks, Yagi delivers captivating lyrics and hummable and memorable melodies,augmented by a buoyant three-piece horn section and edgy and layered guitars builton the foundation of a rock solid, driving rhythm section. His songs are deliveredin an inimitable and endearingly charismatic persona the SFBG describes as “theswagger of Lenny Kravitz and the lyrical prowess of Jack Johnson,” and The SanFrancisco Chronicle called Yagi “a talented songwriter who sings — like KennyLoggins.”

Tina Sparkle “Welcome to the No Fun House” CD
Welcome To The No Fun House is the loud-rocking follow-up to 2007’s album AllAround Champion Screw Up. Tina Sparkle raises the bar with 14 amazing new songs that rock harder and illustrate to listeners that there is much more to look forwardto from this great midwestern act. Tina Sparkle has been touring the states for thelast several years in support of All Around Champion Screw-Up and their 2008 7”release of Ladybugs And Firecrackers. They have shared the stage with national actssuch as The Reputation, The Forecast, Only Children, Scouts Honor, Little Brazil,Living Blue, Red Meat, Tight Phantomz, Landing On The Moon, Red Meat, EllainaMendel, Pash, Lewis and Clarke, and 1090 Club. 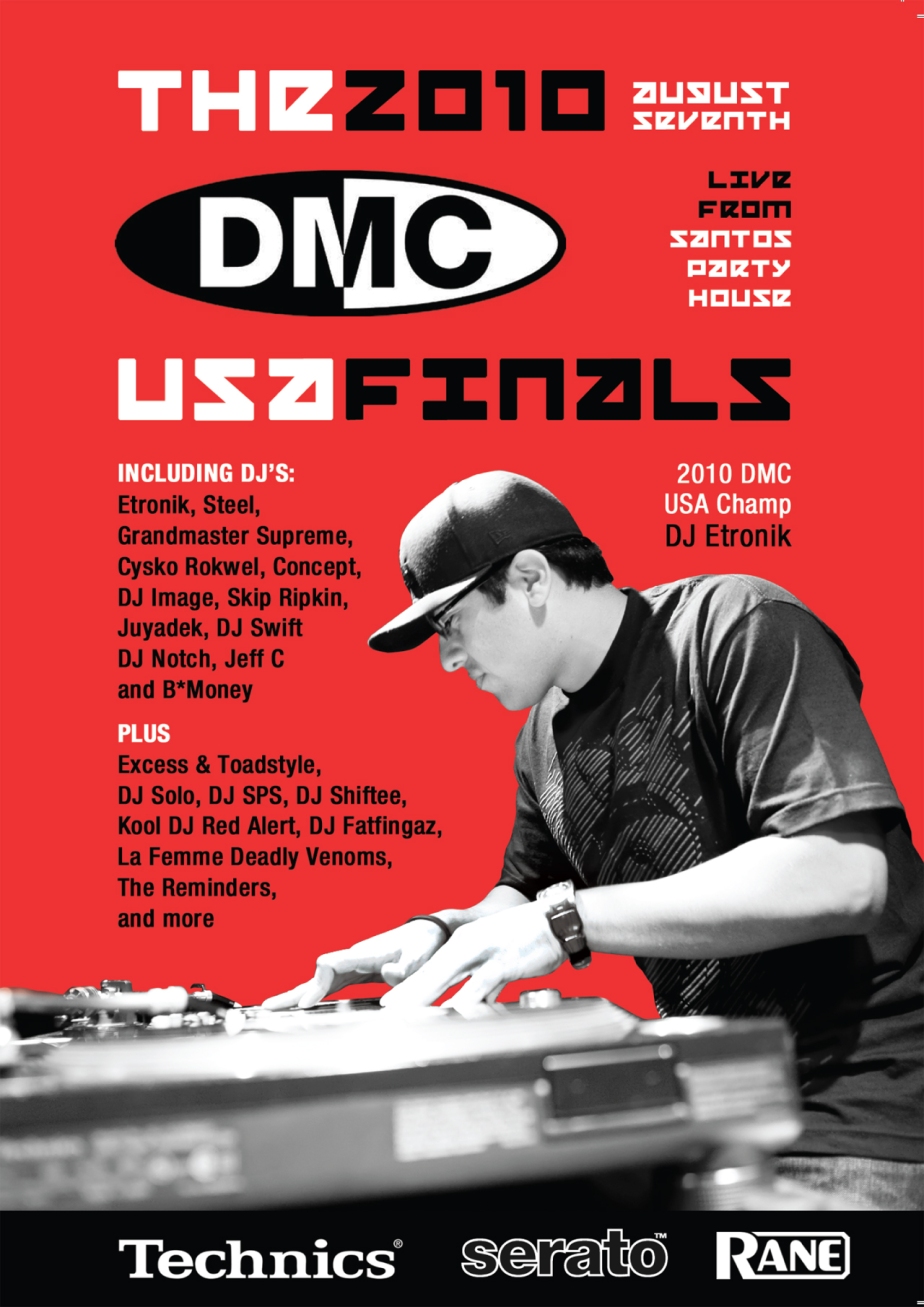 2010 DMC US Finals – DJ Battle DVD
In keeping with the tradition, a new DMC US champion has been crowned for 2010:DJ Etronik from Pico Rivera CA – the only DJ to represent the USA in the WorldFinals in all 3 DMC battle categories: classic showcase, head to head Supremacybattle and Team competion (w/ DJ Lodus as the Angry Exs!) 2010 DMC Battle for USSupremacy Cysko Rokwel (CO) vs DJ SPS (FL) DJ Etronik (CA) vs DJ Solo (NJ) CyskoRokwel (CO) vs DJ Solo (NJ) for the title! DJs including DJ Cash Money, DJ Klever, Craze and Qbert enjoy performing solo and rocking parties worldwide. Others rockwith a crew like DJ Apollo and Shortkut in Triple Threat. And most everyone isinto producing. DJ Neil Armstrong, who has battled in many DMC battles, is Jay Z’sofficial tour DJ! Backstage Interviews with Most of the US Finalists & more! 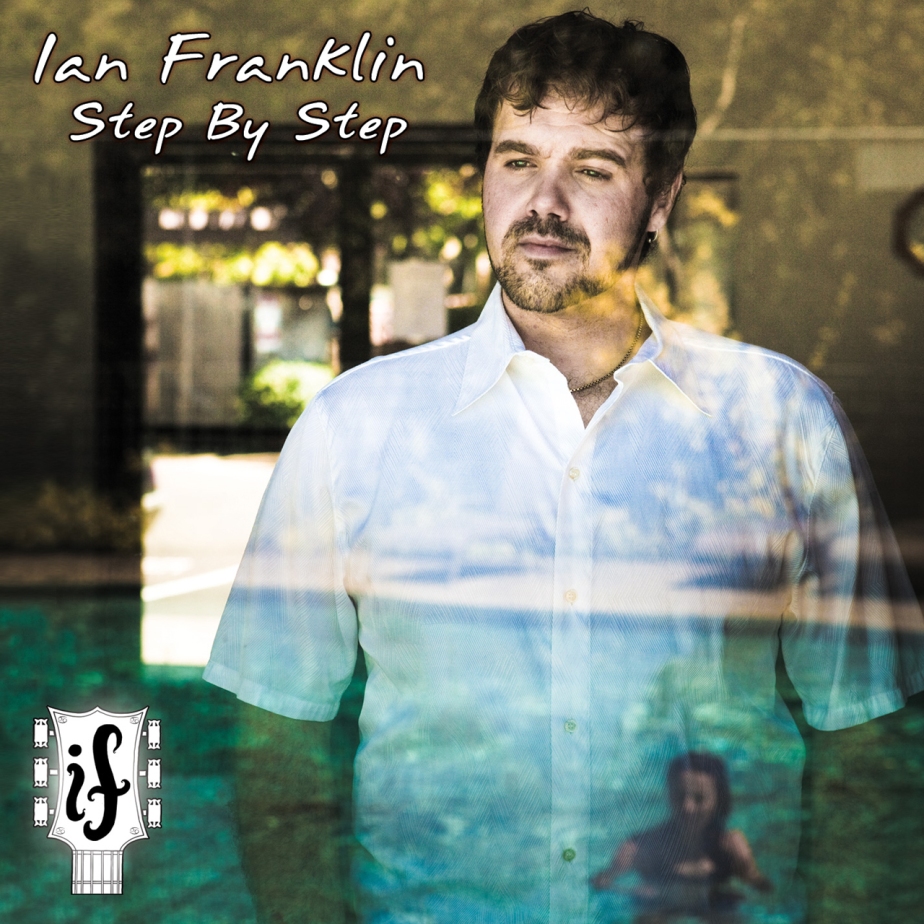 Ian Franklin – Step By Step EP
Singer/songwriter Ian Franklin is proud to announce the release of his debut 6-songEP, Step by Step. The new CD for the Santa Rosa native comes as a career high at the end of a near-decade of non-stop, whirlwind and frenetic coast-to-coast musicalendeavors and evolution that have both educated and matured the young artist intoa multi-faceted musical road warriorepreneur. High praise indeed and with Step byStep, Ian hopes to generate much more of the same enthusiasm. Franklin’s songs pull from his creative imagination, are often fueled by personal experiences andpromote awareness about issues that he believes deserve attention or they simplyprovide joy and help relieve the stress of daily life.
Keep an eye out for our next solicitation May 17th, 2011

This is one of the greatest events of the year. 6 bands and a ton of cool giveaways, all benefiting our good friend Scarlett and Rett Syndrome. If you are in or around San Francisco, please come out and support this wonderful yearly event! Hope to see you there. Doors at 1pm, and Not For Not at 3pm! 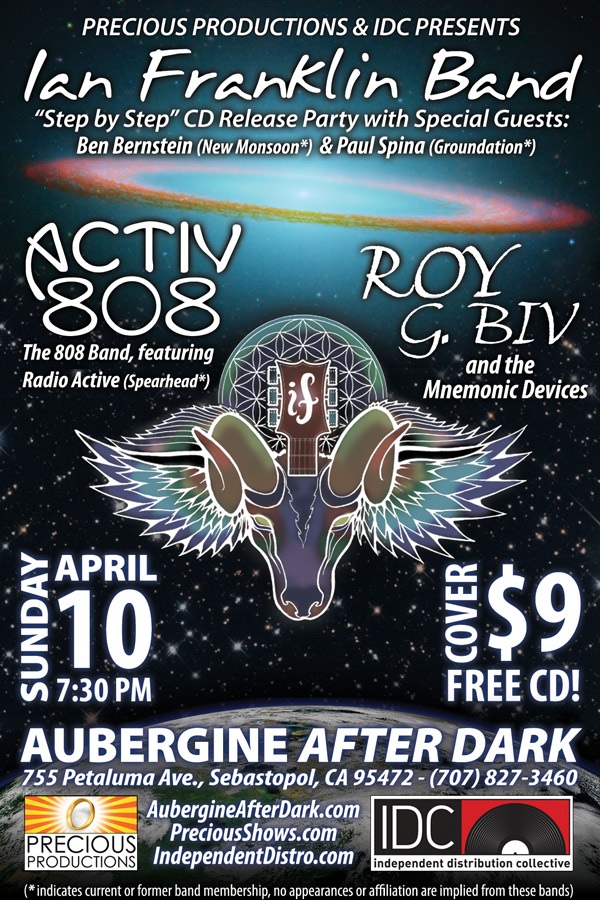 Also performing: Activ808 (Featuring Radioactive + 808) and Roy G Biv and the Mnemonic Devices. Doors at 7:30pm show time at 8pm.
See you there!

Independent Distribution Collective presents its 36th Solicitation just in time for placement for the winter season of 2011. We are excited about many of these new releases and are very proud to have Myka-9 and JtheSarge’s M9 Entertainment joining IDC. Check out the overview of these new titles below, and feel free to visit our website anytime for more information on any of these artists or releases. IDC proudly welcomes these 5 new titles:

Don’t be fooled by their name, Return to Mono are anything but monophonic. Their catchy guitar riffs, strong vocals, and solid synths form a full-fledged and fully phonic electro rock sound on their first full-length effort Framebreaker. Indie Electro Pop lovers will revel in its lush and edgy collage of Electronica and Rock reminiscent of Florence and the Machine meets Ratatat, with atmospheric swirls of keyboards over rock steady beats and the occasional shredding guitar riff.

The Magic Heart Genies is the west coast underground’s newest collaboration. This fresh new hip-hop crew features LA’s one and only, Myka 9, the soulful and lyrical seasoned veteran. Alongside him is JtheSarge the versatile and vocally talented hip-hop artist from Humboldt County, CA. Backed by one of the finest deejays to come out of California, Dj Drez, the group has created a work of art entitled “Heartifact” and is on the move to spread the magic, the power, and the positive message. Accompanying the “Genies” at times, or on request, is Humboldt’s horn section, Fat Back, a three piece, alongside various female guest vocalists that contribute to the “Goddess” attributes of the Magic Heart Genie sound Good energy, good music and good people is what the Genies are all about.

After years of getting into trouble with the law and a few stints in rehab, Dave is the first to admit he hasn’t lived up to his own musical ambitions, let alone those of his cult following. But today he is serious about his career. He revamped his label, Isolated Wax, and is back writing rhymes. In 2005 ran into old friend, musician, and label owner of M9 Entertainment Jthesarge. “He proposed this punk rock hip-hop project,” says Dave. “Which sounded right up my alley. This album features Myka-9 and Medusa on vocals.

SouLifted’s unique and uplifting style was formed when seven of the area’s most talented solo musicians joined together to combine their diverse influences into one collective musical force. With unforgettable flows, soulful melodies, carefully crafted scratches, and the perfect blend of analog and digital instruments- every song on the album stands out in it’s own way. “Higher” takes the listener on a journey through the up’s and down’s of everyday life with socially conscious lyrics and a positive message that will leave you inspired and get the party rocking.

Craig Sharmat – Outside In CD

Over the last few years Craig has had a renewed interest in following his original career path that of being a pop jazz guitarist. As an arranger Craig had already placed arrangements for Rick Braun and Peter White’s Christmas album with Rick and Mindy Abair, but now it was finally time to strike out on his own. After the success of his first album Craig is anxious to share what he feels is his best cumulative work to date “Outside In”. This album is currently charting on Billboard

Check out one of IDC’s favorite Wizard Rock bands Gozzard’s first review on the SF Weekly’s “All Shook Up” Blog! Spread the word…

END_OF_DOCUMENT_TOKEN_TO_BE_REPLACED

IDC’s new blog is here!  Check back here for updates and news about our current and upcoming releases!!!