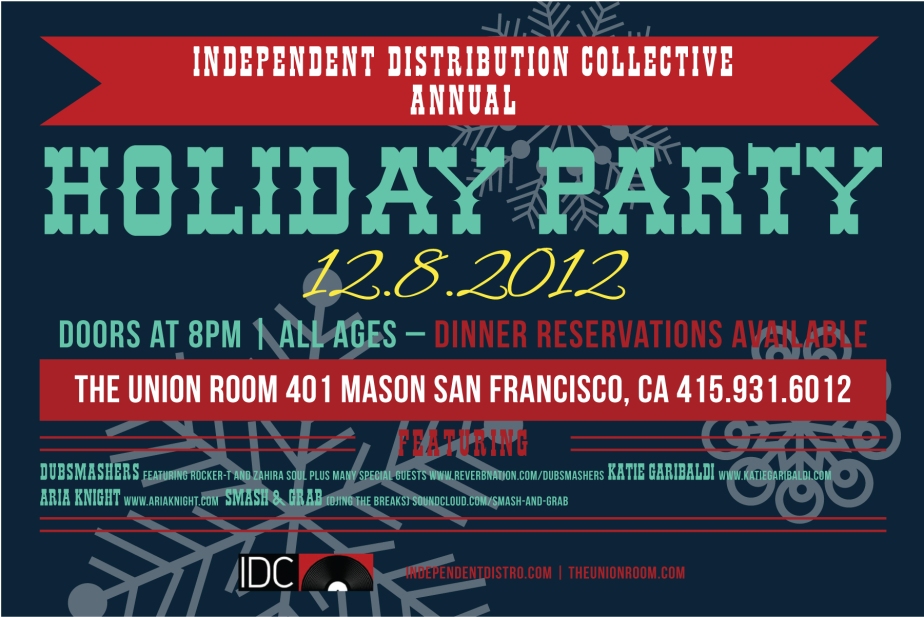 This event will feature a few of IDC’s standout artists and bands who are in the process of promoting and releasing new projects at one of San Francisco’s upscale venues. This event will feature 4 artists/bands and there will be CD giveaways from IDC’s ever-growing catalog. 3 of the 4 acts are San Francisco locals who will be doing major promotion leading up to this event. IDC artists who will be featured at this event include:

These artists/bands span genres from Singer/Songwriter, Folk, Americana, Dub, Moombahton, and even some World and Reggae influences. CDs for these groups will be available on the night of the show. There is fine Cajun food available and the event is expected to be standing room only, so fans should purchase tickets in advance. There are dinner reservations still available, so contact the venue at the number below for more information. Expect a wonderful evening of incredible music and a great party. Press or Radio interested in interviewing any or all of the artists/bands on this bill are asked to contact Steffen Franz at IDC (standout@independentdistro.com). There are limited complementary tickets available for media available prior to the show. The details for this event are as follows:

What: IDC Holiday Party at The Union Room (above Biscuits and Blues)

Smash & Grab – DJing the breaks and closing the night

Independent Distribution Collective presents our 48th Solicitation just in time for late fall and holiday 2012 placement (our sixth of this year). We are excited about many of these new releases and are very proud to have a handful of great artists joining IDC. Check out the overview of our new titles below, and feel free to visit our website anytime for more information on any of these artists or releases. IDC proudly welcomes these 8 new titles: 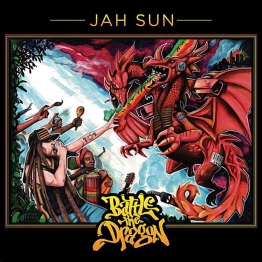 Jah Sun’s third album ‘Battle the Dragon’ – and the follow-up to the 2010-released EP ‘Gravity’ – is produced by a host of mostly European producers and features – just like his previous outings – several combinations. This time guests include Gentleman, Alborosie, J Boog, Peetah Morgan, Stevie Culture and Perfect. ‘Battle the Dragon’ collects 15 tracks of up-tempo contemporary roots reggae with influences from Latin, such as Amoré, a tune that resembles Stevie Wonder’s Pastime Paradise, and dancehall, where the auto-tune drenched title track, and the pulsating Alborosie-combination Ganja Don, are the most obvious examples. 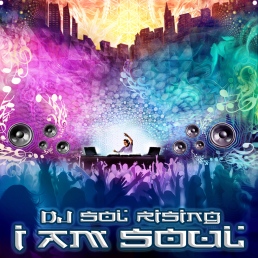 Global Funk album, I AM Soul, reflects an innovative marriage of East and West influences—resulting in an organic, funky blend of electronic beats and world music elements. Celebrating a rich flavor of spirituality, the album emanates creator Sol Rising’s powerful message of Love and Light. A unique spin on the modern hip hop genre, I AM Soul features some of the top independent hip-hop artists—such as Zumbi of Zion I and Rasco of the Cali Agents, as well as world renown instrumentalist, Marco Lienhard. DJ Sol Rising began as a nationally ranked turntablist, and has won major competitions such as DMC and Scribble Jam. He has been featured in major media outlets like the Washington Post and enjoyed by one million viewers on a highlighted YouTube video. Sol Rising has been a spotlight in the Northern California Circuit, and has a fervent following in the Bay area’s booming Ecstatic Dance community. 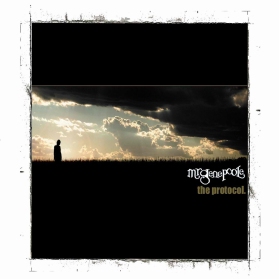 Gene Pool began his career with the RhymeSayers and the group Full Circle, he also followed that up with multiple underground solo records. Gene has also been a fixture in the Minneapolis community doing shows, supporting local artist and always lending a positive word when the opportunity arises. Gene has and always will be one of the most appreciated artists within the Twin Cities. Gene and Cerebellum One AKA Serebe The Word Smith have been working together for over 7 years, Serebe in an expert when it comes to the Twin Cities Hip Hop and the infrastructure of how things work within the city. Minneapolis has always supported the artists that dwell within it; Gene is currently working on his next project to be released soon. 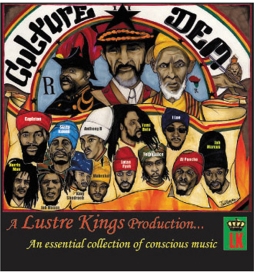 Although it was originally released in early 2002, “Culture Dem” is a groundbreaking album that has slowly grown into an underground classic in the worldwide reggae community. It includes tracks from industry giants like Capleton, Sizzla, Yami Bolo, and Anthony B. but perhaps the most captivating thing about this album is the array of new talent it features. “Culture Dem” was instrumental in bringing names like Turbulence, Jah Mason, Lutan Fyah, Norrisman and others into the spotlight. 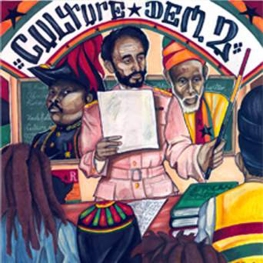 Lustre Kings Productions proudly presents the release of their second full-length compilation album, entitled, “Culture Dem 2”. A follow up to the smash-success “Culture Dem”, this album is another classic collection of the conscious music you have come to expect from Lustre Kings Productions. Artists like Luciano, Natty King, Anthony B., Yami Bolo, Turbulence, Jah Mason, Norrisman, Determine, Natural Black, Lutan Fyah, and many more spit fire over an array of riddims guaranteed to move the masses. The album once again features the musical mastery of Digital Ancient, whose elaborate production skills cover all genres of Jamaican music, from reggae to roots, dancehall to hip-hop. With riddims like “Alarm Clock”, “No Polilics”, and ”Credential”, already enjoying steady coverage worldwide, and never before released riddims like “Talking Drum” and “The Shining”, this album has something for everyone. 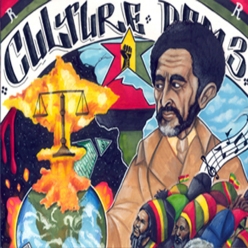 It is with much excitement that Lustre Kings brings you the release of the third volume in the Culture Dem series, crowning a trinity of classic Rasta    reggae compilations. A full-length various artist album, Culture Dem 3 contin- ues the trend LK has set in highlighting new and upcoming talent in reggae music while showcasing current stars. Combining fresh artists with well-known modern roots stars such as Jah Mason, Turbulence, Lutan Fyah, Midnite, Norris Man, Natural Black, Chezidek, and Determine is the formula the Culture Dem series has prescribed to from the start. Some of the rising stars on this release include: Khari Kill, Al Pancho, I Lue, Jah Dan, and Messenjah Selah. The production of Digital Ancient once again takes the listener on a global reggae journey showcasing a different brand of reggae that incorporates hip-hop, dancehall, live roots, and R & B elements throughout. 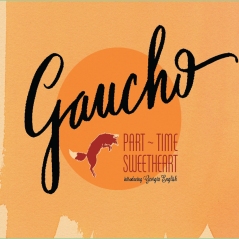 Gaucho is a San Francisco based gypsy jazz and hot jazz style band that formed in 2002 and has worked non-stop in the Bay Area and NYC ever since. The terms “gypsy jazz” and “hot jazz” have been coming around more and more these days but to give names to the greats that truly made these styles famous they have to be Django Reinhardt and Louis Armstrong. The heart of Gaucho centers around guitar, accordion and bass but also expands in size with horns, drums and vocals. Personnel include Dave Ricketts (Bandleader, guitarist and composer), Rob Reich (accordion and piano), Ari Munkres (bass), Michael Groh and Victor Wong (guitar) Elizabeth Goodfellow and Clint Baker (drums), Leon Oakley (cornetist from San Francisco’s legendary Turk Murphy’s Jazz Band) and introducing a brand new sound in jazz, Georgia English on vocals.

The Bridge – Take It Higher – CD 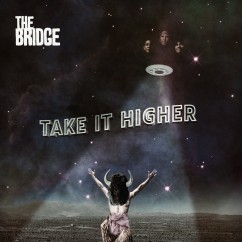 San Francisco Bay Area based trio The Bridge formed in 1993 under the name Rainbow Bridge and originally consisted of guitarist/singer Tim Hager, bassist Ron Shinn and drummer Sam Adato. The three    musicians came together and crafted music reminiscent of the classic power trios like The Jimi Hendrix Experience, Cream, Mountain, Grand Funk Railroad, and Robin Trower. They honed their sound with a yearlong residency at Callahan’s Club in Santa Cruz as well as gigs at various San Francisco clubs including The Paradise, DNA Lounge, Morty’s, and The Nightbreak. One of the band’s early highlights was Earth Day 1993, when they stunned a huge crowd at Santa Cruz’s San Lorenzo Park with an electrifying performance. Over the next couple of years, their powerful sets earned them the honor of sharing stages with legendary artists like Robin Trower, Ronnie Montrose, Dick Dale, Randy Hansen, and The Reverend Horton Heat.