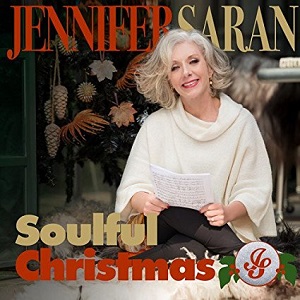 Yes, the Christmas tree has been taken out of the box and the lights, balls and garlands shine like never before, because that atmospheric period of the year has already surfaced: ‘It’s Christmas time’. And so it is time for records with Christmas songs, something that many artists in their musical career at least once venture. With the well-known Narada Michael Walden as producer and arranger in the recording studio, the American singer and songwriter Jennifer Saran, who lives in Hong Kong, has also gone to sing and record Christmas songs.

For her, however, this was not the first time, because in 2015 her record “Merry Christmas, You Are Loved” already appeared on the market and the success of that album has now led to the release of the latest album “Soulful Christmas”. For this album Jennifer Saran has composed eleven new songs, of which we will remember “Long Road Home For Christmas”, album title track “Soulful Christmas” and the ballads “Where Are You Christmas” and “One More Christmas Together”.

“Christmas Lover” (see lyrics video), the opener of this album, is also such a self-written soul song by Jennifer Saran and Narada Michael Walden. It starts with a so-called ‘ghost intro’ of Dr. Otis Williams, after which Jennifer brings the song together with his famous ‘Motown’ soul group ‘The Temptations’. In addition, three striking disco songs can be found on this album with “Merry Christmas To You”, the “Christmas Delight” and “You Are My Christmas Star” sung together with Cornell ‘CC’ Carter.

All of these own songs were supplemented here with six other Christmas songs and some not so well-known covers of traditionals such as “Sleigh Ride” and the rhythmic “Soul Cake (Dedicated To Sting)” that was once performed live by this singer of ‘The Police’. brought. In between we also get two short instrumental intermezzos with the “Coventry Carol” from the 16th century and the “Hark The Herald Angels Sing” composed in 1739.

Finally, we also want to say that we have been able to review this mother of three children here a few times, including last year through her participation in the project with Ladysmith Black Mambazo, Narada Michael Walden and Carlos Santana that led to the single ” Wake Up “and the last studio album of the same name in the middle of 2017. The year before we were also able to talk with a lot of praise about her previous studio album” Walk With Me “. With this Christmas album, Jennifer Saran seems to want to create a gift for all her fans and as far as we are concerned this may be done as a thank you at this time of the year.