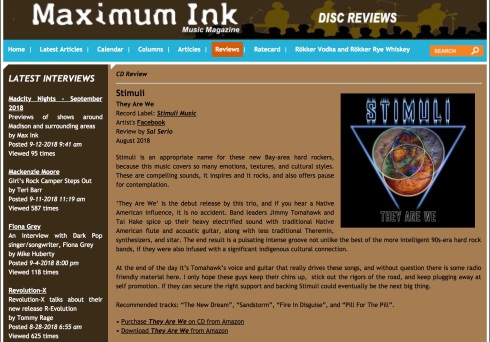 Stimuli is an appropriate name for these new Bay-area hard rockers, because this music covers so many emotions, textures, and cultural styles. These are compelling sounds, it inspires and it rocks, and also offers pause for contemplation.

‘They Are We’ is the debut release by this trio, and if you hear a Native American influence, it is no accident. Band leaders Jimmy Tomahawk and Tai Hake spice up their heavy electrified sound with traditional Native American flute and acoustic guitar, along with less traditional Theremin, synthesizers, and sitar. The end result is a pulsating intense groove not unlike the best of the more intelligent 90s-era hard rock bands, if they were also infused with a significant indigenous cultural connection.

At the end of the day it’s Tomahawk’s voice and guitar that really drives these songs, and without question there is some radio friendly material here. I only hope these guys keep their chins up,  stick out the rigors of the road, and keep plugging away at self promotion. If they can secure the right support and backing Stimuli could eventually be the next big thing.

Recommended tracks: “The New Dream”, “Sandstorm”, “Fire In Disguise”, and “Pill For The Pill”.

For more information or to Order THEY ARE WE, please visit STIMULI’s website and social media pages via: www.stimuliband.com or https://stimuli.bandcamp.com/

To Order THEY ARE WE on digital services please visit: http://smarturl.it/STIMULItheyarewe 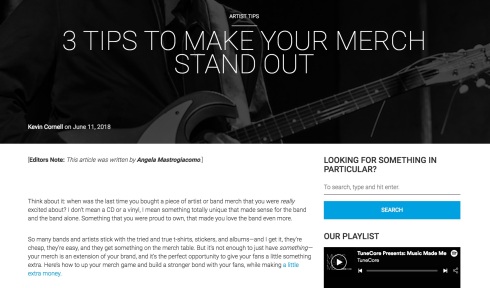 In the music business for almost 35 years, including many years as a technical director and production manager for dozens of nightclubs and venues in New York, Maui, HI, and San Francisco, CA.

Many years as an independent artist, DJ, producer and engineer for over 50 recording projects. 15 years of national tour managing and running an independent “conscious” reggae record label with over 20 releases.

In addition, Steffen speaks at industry events, teaches music business at Pyramind in San Francisco, and Oakland School of the Arts, and technical directs and show calls about 10 large corporate events each year.

Uptown Plug had the pleasure of chatting with Steffen to talk about how the industry has evolved, the impact of streaming services on independent artists, music licensing, distribution and plenty more!

1) INDEPENDENT DISTRIBUTION COLLECTIVE HAS BEEN IN BUSINESS FOR THE PAST 10 YEARS, HOW HAS THE MUSIC BUSINESS EVOLVED AND HOW HAVE YOUR COMPANY ADAPTED TO IT?

We’ve actually been in business since 2004, almost 14 years now! We started as a CD distributor with just 8 labels in 20 or 30 retail stores. Things have changed so much from when we first started out as a CD distribution company.

Back then were solely focused on getting independent artists and label’s CDs into retail stores. We began to flip our model as early as 2006 and focused on Digital Distribution, and by 2010 we were doing full-scale marketing campaigns that include PR, Social Media Marketing, Digital and Physical Retail Marketing and overall project management.

By combining all of these marketing verticals with distribution, we created something very unique in terms of the independent music scene. There aren’t many companies you can come to that can give you a solid push while keeping prices affordable to the average artist/label.

Overall, the music industry has changed quite a bit, but it’s still about getting fans, and engaging them, and now it’s about providing music and other content in any place a consumer might want to buy/stream/listen to it.

Artists and labels should focus on development of fans and material and IDC is built to assist in all aspects of the release and marketing, resulting in a much more professional (and hopefully profitable) effort.

2) WHAT ARE YOUR THOUGHTS ON THE RISE OF STREAMING SERVICES LIKE SPOTIFY AND APPLE MUSIC, PARTICULARLY WITH THEIR IMPACT ON INDEPENDENT ARTISTS?

Simple as that. The stream itself isn’t worth a ton of money per play, but the idea of a new fan discovering an artist’s music is of great value.

The goal of any independent artist (and major label artists for that matter) is trying to attract new listeners on services like Spotify, Apple Music and YouTube, and the end goal, like with radio in the past, is to capture that “fan” and convert them into a customer.

If streaming listeners become fans and can discover new artists, and then search for an LP of their entire album, or a CD to buy for a friend, or a download, or goes to a show, or even subscribes to their email list, then you are actually taking full advantage of this new eco-system.

As a songwriter, publisher, and rights-holder myself, I would like to see streaming royalties come up a bit which would help independent artists get a fairer share of the money these companies are collecting.

3) WHAT IS THE MUSIC LANDSCAPE LIKE FOR AN INDEPENDENT ARTIST IN 2018? THEY HAVE ACCESS TO MORE PRODUCTION TOOLS, MARKETING PLATFORMS AND FREE KNOWLEDGE, BUT I ALSO FEEL LIKE IT’S A LOT HARDER TO STAND OUT THESE DAYS.

This is the blessing and curse of today’s music industry. There are dozens (if not more) tried and true ways to get your name and music out there, but how you invest in terms of creating a buzz, and then having the infrastructure to capitalize on more revenue streams than ever is the real challenge.

Music licensing, international distribution and of course streams and sales, give independent artists way more potential to make more from every composition than ever before.

The downside is that everyone can get music out and the blessing of the low bar of entry can turn quickly to the harsh reality that there are millions of people able to create great music, with little upfront investment.

I do think the best of the best still rise and that hard work is always rewarded with more success. This business has many different avenues to succeed. I would counsel keeping a wide lane as an artist develops, so that whatever they find, or that finds them, still gives them the ability to create and release their music.

4) MUSIC LICENSING IS ONE OF THOSE TOPICS THAT NOT MANY INDEPENDENT ARTISTS UNDERSTAND FULLY WHICH MEANS THEY’RE NOT GETTING THE MAXIMUM VALUE OUT OF THEIR MUSIC. CAN YOU EXPLAIN THE IMPORTANCE OF MUSIC LICENSING IN THE SIMPLEST WAY POSSIBLE?

My simple answer is in the old days independent artists didn’t have a lot of diverse revenue streams. They didn’t get a lot of licensing placements until the 1990’s when TV networks and film producers started turning to independent artists and labels and there is still plenty of revenue to be made with a basic understanding of music licensing.

Composers get paid royalties based on their songs being used in a TV show, film, game score, or other types of performances (commercial radio also falls under this category).

If you are composing songs, then you need to register your copyrights (the song’s ownership) at www.copyright.gov and then join a performing rights society like ASCAP or BMI (in the US) and register both the writer and publisher shares with them.

This allows for music supervisors and producers to choose an artist’s music, and a way for those “uses” to pay both upfront in the form of Sync (Synchronization) and performance royalties from the licensing placements.

5) HOW HAS THE INTERNET CHANGED MUSIC DISTRIBUTION, ESPECIALLY WHEN IT COMES TO RETAIL CHANNELS?

This answer is pretty straightforward for music or almost any other product in the 21st century. The internet has allowed for anyone to sell anything to anyone else, anywhere in the world.

The fact that a fan of an artist can buy a CD from Amazon, or a download from iTunes, or Google Play, or Stream from Spotify, and buy an album (Vinyl) from a small store in Portland or Austin, and can even buy using Bandcamp, which is likely the “best” highest margin sale for an independent artist, without any real gatekeepers or large split of the sales revenue creates much more opportunity overall.

All of these various revenues flow to the artist or independent label, giving more overall revenue, and more transparency. The internet allows for people to communicate and sell to many people with the old issues of proximity and opening/closing times just aren’t an issue anymore.

6) WHAT’S NEXT FOR INDEPENDENT DISTRIBUTION COLLECTIVE? WHAT ARE YOUR PLANS FOR THE NEXT 5 YEARS?

IDC has a large physical distribution network, and we plan to continue to sell CDs and LPs to all of our physical retail outlets around the world for the foreseeable future.

IDC’s plans are to continue to expand our services to both small, artist run labels and larger labels and brands over the next few years.

IDC has also been working on a handful of non-music related projects over the past few years and we will continue to provide marketing services to independent businesses that IDC feels are in line with its’ own core focus and next generation marketing strategies. 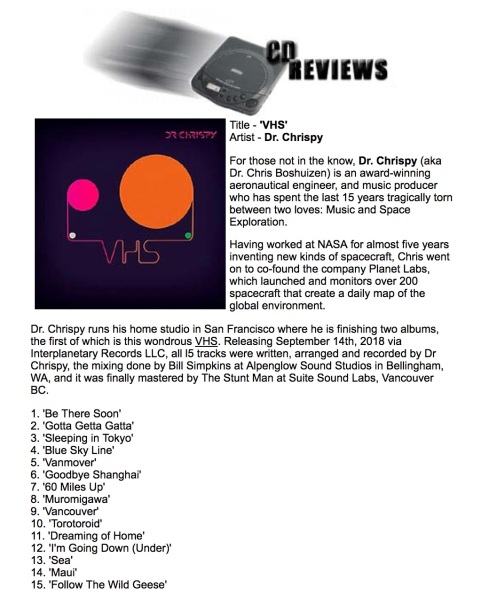 VHS is, and I should know, having now listened to it through three times on the bounce, a wonderfully ambient, bouncy, fun, even thoughtful at times collection of instrumental tracks that Dr. Chrispy began writing way back in 2003.

It was as he was traveling for work as an aerospace engineer and if you listen carefully to the tracks, never allowing any of them to merely drift above and over and away from you, you can most definitely hear the majesty of our universe embedded within each of them.

Indeed, and furthermore, each track was written in a different location, titled with the name of a city, airport code, or local attraction, and captures the vibe of each place and moment in time.

Basically put, VHS is an auditory travel diary, inviting you along to hear and experience the evolution from Dr. Chris Boshuizen, Space Scientist, to Dr. Chrispy, the Artist.

Oh, and showcasing perfectly Dr. Chrispy’s painstaking attention to detail, there will also be released a limited first edition CD featuring a double page spread photograph shot inside the cockpit of a vintage Boeing 747 aircraft.

The disc photography lines up with the cover, and hidden behind the disc is a shout out to one of Dr. Chrispy’s greatest film influences, ‘Star Trek IV: The Voyage Home’!

Dr Chrispy (AKA Dr. Chris Boshuizen) is an award-winning aeronautical engineer, music producer, and songwriter who has spent the last 15 years tragically torn between two loves: Music and Space Exploration

Come and hear Dr Chrispy’s new album ‘VHS’ in person at Asiento on Thursday 20th September. Meet Chris and some of the contributing artists, and listen to the full album on a full sound system.

Asiento has a full bar and kitchen and drinks and food are available for purchase. The food is excellent and highly recommended. Entry to the event is free.