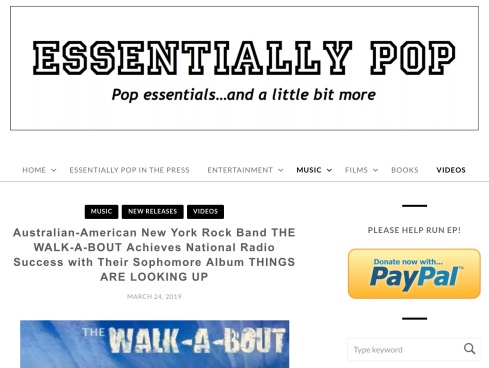 Since the album’s release, THE WALK-A-BOUT has achieved massive radio success, consistently landing in Top 20 charts alongside artists such as Paul McCartney, Jeff Tweedy, Mumford & Sons, Death Cab for Cutie, Sharon Van Etten, and Jackie Greene. ‘THINGS ARE LOOKING UP’ is currently at #12 on Roots Music Radio’s Alternative Rock Chart. The singles ‘Consequences’ and ‘By My Side’ each broke the Top 10 RMR Alternative Rock Chart, and the single ‘That’s Just The Way It Goes’ reached #13. The video for that song had play on over 75 broadcast outlets throughout the summer and early fall of 2018.