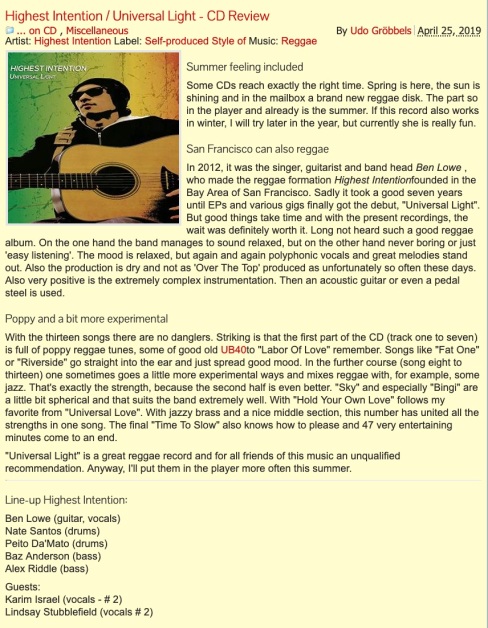 Nice review for Independent Distribution Collective​ label IAC Records​ on The Rocker UK. Check it out!

Reviews roundup – The Stray Cats vs. Paul Nelson vs. Danny Lynn Wilson vs. Iron Savior vs. IAC sampler vs. Lobster

I loved the Stray Cats. Of course I was just a bairn at the time and already enthralled by Showaddywaddy, Matchbox, Darts and Shakin’ Stevens so when something came along in a similar vein but a wee bit more raw and raucous, I was a goner.

Of course success didn’t last and with their chart days long gone and their last album of original material, “Choo Choo Hot Fish” came out over a quarter of a century ago. But now, to mark the 40th (Jesus H Christ!) anniversary of their formation, they’ve gone and made a new one. The good news is it sounds exactly like the old ones!

It would seem that the original magic of Brian Setzer (guitars/vocals), Lee Rocker (bass/vocals)…

California has, is and will be a region brimming with Reggae artistes and destination for many tours. Numerous elements showcased from North to South. Foundation statesmen like Fully Fullwood, Tony Chin, Haile Maskel, Lesterfari and Shakaman continue to make solid impact after decades in Southern California. New generation bands like Tribal Seeds thrive in San Diego. In the North, veterans like Earl Zero, Red Lions (Burton Eubank/Jeremy Grey), Ras Biblical raise Fyah levels alongside new Roots units like HIGHEST INTENTION. Their debut, “UNIVERSAL LIGHT” hits stride with a collective of well experienced souljahs….

“Morning Light” sets a Roots tone with vox from Arise Roots(one of the premier CA Rootz bands) frontman Karim Isreal. This is tradition and progression in Rightful balance. Karim exalts positivity over a detonating riddim with vivid horns, crucial licks and kicks and Toho’s lilting bass. Superb production with a crisp edge. “Fat One” is a bubbling great flow. Ben has a soulful delivery and heartically celebrates Chalice wise. Herb anthems have saturated the market but the lasting lyrics observe the abundantly green Bay Area runnings with original urgency. “Ocean” shines with a horns rich musical backbone and an Ital message presented with perfect simplicity. Standout selection !!

“Vibes” has radio ready aspects; showcasing “Cali-Reggae” Roots and branches. The listener can’t help but absorb the obvious joy that took place during studio sessions. Big guitar licks and drum rolls on course. “Riverside” is a brilliant ride! Ben’s experience producing music for a large scale television audience is translated nicely here. Thought provoking lyrics born with infectious riddim back and crisp yet Dub flecks sprinkled through and through..boom!! The levels are lifting on “Dive In”. Ben’s Singjay flow is spot on with the refreshing talent of Empress Lindsay Stubblefield. Taut riddim with Jazzy overtones and international appeal on the wyah. A Joyful anthem bound to please.

“Escape” continues the positive atmosphere. Over a tight riddim recalling great ‘80’s Kingston sessions, Ben turns up the vibes factor. Remarkable mix and production. Each instrument presented just right with a Dub outlook on Scientist caliber qualities. “Sky” is a ethereal Love ode that bridges tradition with surging progression. Ben’s hearty vox float over a bed of riddimatic roses. Finger on rewind! The title track is one that shines with universal message. The band’s observations are mystic and pertinent. Crucial wah wah and country licks correspond over the Dub laden riddim like Fyah fly. Quality in all aspects. “Hold Your Own Love” is masterclass ability. This is professional Reggae music. The arrangements possess a Third World quality; recalls the timeless anthems the late, great Bunny Rugs and “Cat” Coore created. Amazing horn section; bubbling is hotta; bass will cripple the hips. From lyrics to riddim, this song Fyahs on all cylinders.

“Binghi” is Hearty tempo for sure. Niyabinghi frequency with flute and organ…a solid interlude…. “Reggae Paradise” continues the quality songwriting, musician manship and journeyman mixing theory. The ability to incorporate nuances of other genres is commendable. This great album closes with “Time So Slow”. An impeccably crafted offering indeed! The spread is laid out on this table! Meditative in message; active on the riddim. Solid structure with reinforcements of drum and bass accordance, deep “organ”-izing and tasty axe work. Rewind again.

Answers to your questions.

The 2019 Girl Power Conference shirt will be on sale at the Conference. $20

The STIMULI calendar is full of great shows and exciting news!
Lets get right to it:

Tonight! Friday April 19th, STIMULI play a hometown show in Oakland, CA at the Elbo Room in Jack London Square. The band will join fellow Oakland-based industrial act Black Book and Manos Lindas from SF.
This is sure to be a superb show at an excellent rock and roll venue!
Info available at: https://www.facebook.com/events/406607566556473/

Next Friday April 26th, STIMULI travel north to Mendocino County
joining the one and only Prog-Rock maestros Points North at the Ukiah Brew Co.
Info for this show is available at:
https://www.facebook.com/events/273404876887847/

It was also just announced that STIMULI will open for long time
Marin County rock band Flanelhed at thier album release show
on Saturday June 1st at HopMonk Novato.
This show will also a be celebration of their 25th anniversary as a band!
Info available at: https://www.facebook.com/events/1190063561155899/

Follow @stimuliband on social media and visit www.stimuliband.com
where you can also stream or purchase a copy of the album ‘They Are We‘.

Thank you for supporting STIMULI and original rock bands everywhere.
We appreciate you,

“They Are We” Official Music Video:

To order THEY ARE WE on digital services please visit: http://smarturl.it/STIMULItheyarewe

In business for over 14 years, IDC is a marketing and distribution company based in San Francisco. Offering CUSTOMIZED MARKETING CAMPAIGNS together with wide-reaching DIGITAL AND PHYSICAL DISTRIBUTION channels, IDC increases awareness and demand for independent music releases.

To receive a FREE IDC MARKETING PROPOSAL including a detailed cost breakdown based on the size and scope of the effort, please let us know some general information about your project by filling out our IDC REQUEST FOR INFORMATION (RFI) FORM.

Sign up for an IDC Promo Campaign by May 15 and receive 10% OFF the final Campaign price!

IDC Promo was built to be a flexible service and every campaign is specifically customized to each project. Campaigns are based on hiring a Team of industry professionals for various lengths of time, which affects pricing.

To purchase on iTunes:

To purchase on other services: