Three 22-year-old men meet one day in Tampa, Florida. James David Maney (bass) is around the corner, Jesse Leonard (drums) was born in New York and Eric Carnevale (guitar and vocals) was born in Hartford, Connecticut. The circumstances of their meeting were not exposed to us but one thing is certain  : the day these guys decided to make music together under the banner of their group Acting Natural , the music made a good deal.

I speak here of music in general and not of a kind of rock in particular because this trio of Acting Natural is simply federating between the styles and the generations of music lovers, with its rock one could not more natural and sincere. If they called themselves Acting Natural, it was because these three fellows knew what they were doing and what they were.

Including in their look, which we see on the cover of their first EP  :dark suits, black ties, neat haircuts although a bit long. Well, that does not remind us of the Beatles? Exactly, it will be question here of the four of Liverpool, which exerted a huge influence on the young people of Acting Natural. It’s not for nothing that bassist JD Maney holds a Hofner in his hands on the inside sleeve of the record, while Eric Carnevale has a Rickenbacker guitar in the paws, just like George Harrison’s.

The first song of the EP slips into the boots of the Fab Four and reaches a level of quality close to perfection, in the vein of the composer genius of the Beatles. From the first measurements of “The one”, we already have the chorus in mind, we are carried away by this rock slightly garagiste finesse and clarity, literally impeccable. This title has all the finery of a huge hit, although it was the song “Pairadice” that got the favor of the American public in the digital charts, with more dancing intonations to the Red Hot Chili Peppers, late era.

After a first song of this caliber, the people of Acting Natural are expected at the turn, ready to be worn at the top of the maximum score if their EP remains entirely on this line. However, it will deplore a small loss of initial flamboyance on the following songs, the group simply remaining very good and endearing on the beautiful ballad “Nicole”, from a luminescence all McCartneyenne on “Early morning” , captivating on “Bloom”and remarkably psychedelico-garage to the Charlatans (those of the Sixties, not the English of the Nineties) or to the Buffalo Springfield on the last piece “Missed the train “ , second best title of this half-dozen.

It is therefore a first bluffing business card that these ephebes slip us under the door. A little more maturation and a gradual detachment of the shadow of the Beatles in favor of the acquisition of a more personal style will undoubtedly Acting Natural a leading group in the new generation of rockers of the future.

Two of the three members of the Acting Natural – Eric Carnevale and Jess Leonard – gathered to talk to Nocturnal about this new project from New York and about the first work – a homonym EP – that has caused so much furore on the other side of the Atlantic.

Live, how are you? Can you present the Natural Acting to the Portuguese rockers ?

We are a rock ‘n’ roll band with three elements, coming from New York. We are formed by Eric on guitar, Jesse on drums and JD on bass. Our music comes from the past while incorporating elements of the present and we could not be happier to be able to present our music to rock fans in Portugal.

What is your musical background ?

We started playing together when we were 12 or 13 years old. At first, we learned our favorite songs, focusing on the music of the 60s and 70s. From there, we started writing and recording our own material, as well as playing live, which is what we prefer to do.

When and why did you decide to move forward with this project?

We started playing just for fun, but we soon realized the potential to take the band one step further and move forward. We all knew that we wanted to live a life in music and the band became the perfect platform to do so. Being a longtime group of friends makes it easy to play and work together.

What names and / or movements do you cite as your main influences?

We love the sound and the production of rock and motown groups of the 60s, like The Beatles, Led Zeppelin and Stevie Wonder. The rhythms and harmonies of that time are a great influence for us. However, we draw inspiration from almost every decade of music to the present. Arctic Monkeys, Tame Impala and Coldplay are some of our most recent favorite names.

Your debut EP is finally out. What is the feeling in the band?

We are thrilled to have this EP in the world and finally have our own music out there. And the response was great – there’s nothing like showing fans the music you’ve worked hard on. We are definitely looking forward to sharing our live energy with everyone, following this release.

The first single , Pairadice , reached # 1 in the Top 5 Most Added . Was it a big surprise for you?

Yes! At least a pleasant surprise. This is a high energy song, so we chose it as the main single from our EP. Seeing our names on the tables, alongside some of the artists we hear regularly, was unreal!

The writing and recording processes took place in the same sessions, right? How was this experience?

Yes, some of the songs were written and recorded in the studio, sometimes even on the same day. There is electricity in the air when you are recording something so new. We were all on fire during these sessions, and definitely this can be heard in the recordings.

We will end the year with the iHeartRadio Jingle Ball Tour , performing in some of the largest venues in the USA. In the new year, there will be more tours and live performances as well as lots of new music. We’re all excited about what’s on the horizon for us as a band.

Thank you. Do you want to add anything else?

We want to thank everyone at Nightlife for your time and also to thank all those who have supported us in Portugal so far! We look forward to the day when we will play there and go out with you.

ACTING NATURAL: ACTING NATURAL EP
26/11/2017
1967 was the highlight of The Beatles. Exactly half a century later, from New York sounds the same sound over the ocean. What inspires a young trio from Tampa Florida to conquer the world from the big Apple with a nostalgic retrospective? Love for quality music of course.
Three Americans, dressed up with badgers, undeniably fan of the British super band and the London Led Zeppelin, released their first EP last month. Acting Natural shines on this with six authentic pop songs. (For the Americans, of course pure rock & roll.). Literally you should not take the group name ‘Natural Acting’ either. Even the haircut reminds us of John or George.
As you might suspect, Acting Natural catapults itself in the 60′-70 ‘past.
Opener ‘The One’ can be confused with a Beatles song for my part. In ‘Nicole’ they can not hide their American roots. Singing together, elongated end notes and a catchy melody à la Todd Rundgren point to their natural musical behavior. Also in ‘Missed The Train’ is that Liverpool ghost popping up. The later full album will show whether British DNA is ‘acting’.
Acting Natural delivers beautiful work that will delight both young and old. The trio leaves no opportunity to spread their sweet revival message. From hip-hop clubs to hardcore metal venues, positive reactions followed everywhere. Also mine!
Line up:
Eric Carnevale (Lead Vocals, Guitar, Piano, Organ)
James David Maney (Bass, Vocals)
Jesse Leonard (Drummer, Vocals) 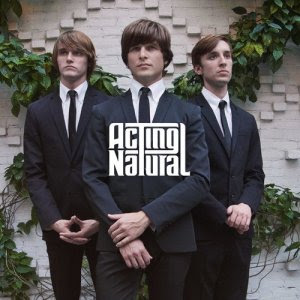 Well they look like nice boys. My Mum would approve.

She’d also approve of the music as they’ve decided to go for a sixties throwback pop rock sound with nods to the Kinks and pre-rubbish Beatles.

Eric Carnevale on vocals, guitar, piano, organ and percussion; James David Maney on bass and vocals; and Jesse Leonard on drums and vocals, for it is they, are actually from Tampa, Florida, not Muswell Hill although they’ve relocated to New York to bring their sounds to the world.

And they’re very good at what they do. It’s very melodic, there are some lovely harmonies and on numbers like ‘Pairadice’ they show an inventiveness and flair that should serve them well. It’s well produced and presented and is a fun EP for all the family.

Translated from Via Nocturna:

Highlights | The One, Pairadice, Missed The Train

Premiere work, in EP format, of the original trio from Tampa, Florida baptized as Acting Natural .Six songs of great musicality, melody and vocal work, with a sound that recovers the simplicity and clarity of composition of The Beatles projecting it to a more golden aurea. The band acts naturally and creates a unique, organic and coherent sound led by a creative bass and where guitar solos, although little present, when they arise is imposed by its quality.