On the new single “CHANGE”, contrasting artists Rahman Jamaal & Razteria, fuse on this trilingual crossover track which calls for revolutionizing our mind-state without fear. Change is the only constant in Life.

RAHMAN JAMAAL
Rahman Jamaal is a performing artist, emcee, musician, actor, and educator who first debuted in the 2003 Sundance Film Festival as the star of the movie “The Beat”. Rahman Jamaal performs for Rondavoux Records, the San Jose-based rap group Projekt S.E.E.R., and the Redwood City-based funk/rock tribute band Blood Sugar Sex Machine. He works with musicians and youth in the Bay Area as founder of the Rap Force Academy, and nationally as the Executive Director of Hip Hop Congress. He also works with organization such as with The Riekes Center for Human Enhancement, The Bring It Back Tour, The Hip Hop Chess Federation, Performing Arts Workshop, StoryTeller Project, and All-Star Karate Center. In 2014, he won the Lennon Award for Hip Hop in the International John Lennon Songwriting Contest (JLSC).

Over the past ten years, Razteria, performing under both Razteria and Renee Asteria, has planted musical seeds throughout the Americas (Argentina, Bolivia, Canada, and USA) and Europe (France, Switzerland). In late 2015 Razteria completed her fifth album Aventurera, which will be available as of March 18, 2016 on digital platforms worldwide and in select stores.

Razteria has opened for and performed with Grammy award winning Reggae artist Michael Rose, popular UK/JA lover’s rock Lloyd Brown, The Garifuna Collective from Belize and others. Noteworthy performances include Reggae on the River, World One Festival, World Fest Los Angeles, Northwest World Reggae Festival and the Montreal Jazz festival, to name a few. Her music has been licensed by MTV’s True Life series as well as a few independent films.
Razteria has also begun building a recording studio as an accessible and affordable space for aspiring artists.
http://razteria.com/
http://facebook.com/reneeasteriamusic/

Born and raised in Iran to an Armenian mother and Jewish father, Amanda aka Sol Atash has been referred to as “the walking United Nations” since a young age. Sol meaning sun in Spanish and Atash translating to Fire in Farsi (the language of Iran), Sol Atash embodies Sun Fire -a Farsi speaking fiery Sagittarius. Sol was encouraged to sing in 2011 by an artist with whom she was working. She sings Reggae music in Farsi, very rare indeed. 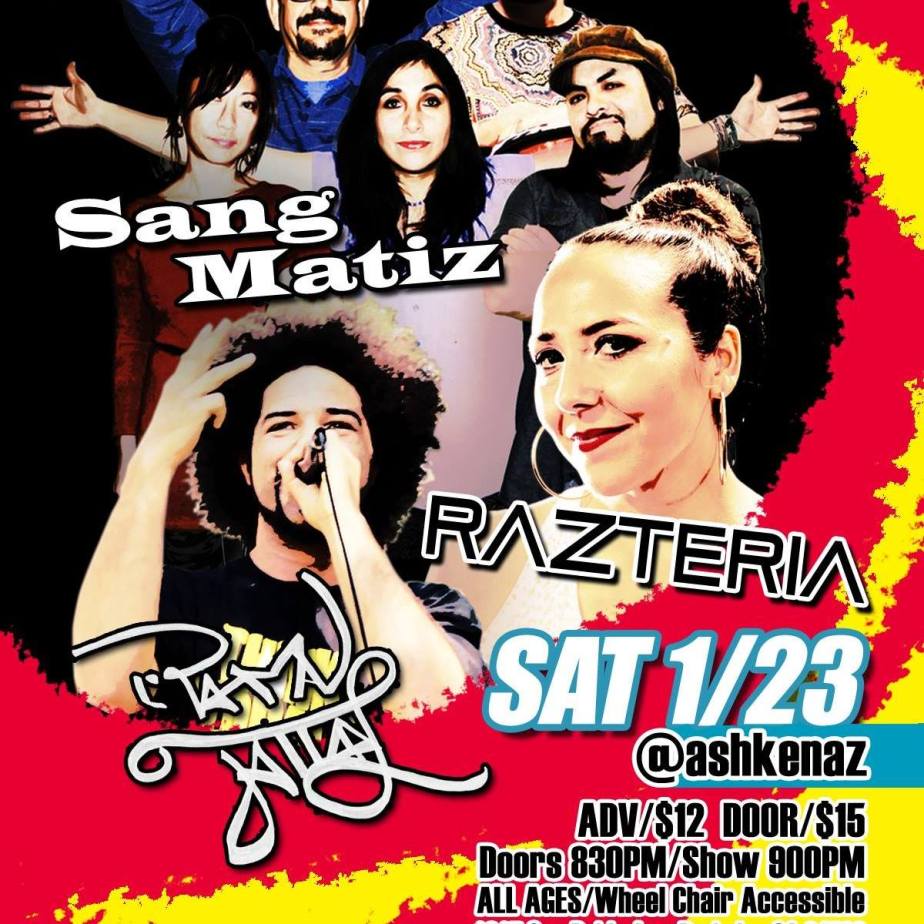 AVENTURERA blends South American sounds w/a flavor of reggaeton, intertwining talents of Yuriza Jared (Sang Matiz) & Razteria. We become the adventurer in the song, traveling either physically or spiritually, to grow & heal. Available for purchase on all digital platforms 1/15/16.

CHANGE, contrasting artists Rahman Jamaal & Razteria, fuse on this trilingual crossover track which calls for revolutionizing our mind-state without fear. Change is the only constant in Life. Available for purchase on all digital platforms 1/22/16.

Just added to the line up! A feature song by artists from the Empress Unification Collective: