Zion I is calling on his fans for help. Monday, July 10th, Zion I was shooting a music video for a new song. Four hours into the shoot, he was robbed at gunpoint and the camera was stolen. Thankfully no one was hurt.

Zion I’s last album was inspired by his own personal losses as well as the current political and social climate of the world-at-large. His reason for filming in the heart of West Oakland and the storyline of the video, written by director David Telles, make it all the more ironic that he ended up being victimized.

There is a deductible to pay to get the camera covered by insurance, but the money spent on the video has to be raised to re-film. As an independent artist, Zion I is funding this alone. There is no record label financing this, which is why he is reaching out to you.

Please help him raise the money to get the camera back and the ability to reshoot the video and see your name as an funder in the credits!

Please Donate to Help Zion I at www.gofundme.com/theystoleourcamera

If you are around Oakland or the East Bay, IDC’s Operations Manager Ben Lang will be performing this weekend. Catch The Devil’s Chord this Saturday, May 6th, at the Dashe Cellars Wine Garden in Oakland. They will be playing sets between 1pm and 5pm. Good times are guaranteed!

For more information on this event, please visit: www.dashecellars.com/news/index/268

“The Bay Area has had one of its most successful Grammy years in recent memory. With a total of 18 nominations for local artists and producers, the region has at least garnered the most nominations it’s had in five years according to Michael Winger, the Executive Director of the Recording Academy’s San Francisco Chapter.

One such Bay Area artist feeling the glow of success is Oakland’s Fantastic Negrito, a blues guitarist and singer named Xavier Dphrepaulezz who first grew to fame after winning NPR’s Tiny Desk Concert Contest in 2015.

Major congratulations to D.Edward on his video for “Show Me” feat. Jenna Lavoie and this accomplishment. The video was released just 3 months ago and already has 10,723 views. Independent music making waves! Keep up the amazing work.

To watch the video and be a part of the D.Edward movement, click the picture!

Learn more about this Oakland based singer at http://dedwardmusic.com.

Tomorrow at 7pm, D. Edwards will be rocking The Awaken Cafe in Oakland.

In addition, D. Edward is donating his share of the ticket sales, and matching dollar for dollar, to a charity that provides personal hygiene products to homeless women. A great artist working for a great cause!

Oaktown Indie Mayhem has just announced D. Edward as one of the winners for the 2014 Oakland Mayhem Festival! He has been presented with the People’s Choice award and will be performing at the Festival in mid-November.

To find out more about the festival and listen to the winning artists, click here. 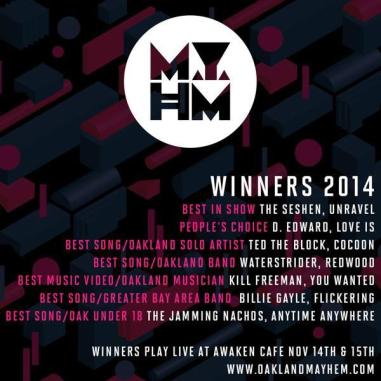