To order “NO MERCY” on iTunes and Other Digital Retailers please visit:

To order “NO MERCY” from Bandcamp please visit:

“This is the second album for the rocker Ray VAUGHN, who is a guitarist, and at the end of the seventies, played with THE HOSTAGES until around 1992. It is not until 2013 that we see him on stage to defend his first solo effort WAY DOWN LOW with punk rock trend. This second album is rather rock. Ray has surrounded himself with a band of rockers who asks only to beat: Michael ROSEN guitarist as Ed RAWLING also producer. We owe them TESLA, RANCID, PAPA ROACH ex THE HOSTAGES. New people try to break through Ray’s reputation as James DE PRATO of CHUCK PROPHETS on bass, Prairie PRINCE, drummer of TUBES and RUNDGREN.

An album based on guitars, with a song present and rather passionate. He started off well with Human Calculator, animated by the Hammond organ by Phil BENNET of STARSHIP, guitar maids and a rhythmic as excited as overflowing. Ray hardened the subject with Wounded Bird: no dead time, one runs like a machine heated to block with profusion of guitars, Ray to sing particularly virulent for a title more persuasive. It is with a certain culte that intervenes a resumption of True Faith extracted from the repertoire of NEW ORDER, the famous group of Manchester and not that of ex STOOGES. We combine power and inventiveness with bass forward, more violent than the original but what matters is excellent.

Change In Latitude changes completely, we appreciate the slide of James DE PRATO, rather blues title in the form of pure very USA. One puts the nail with the superb Song For You in emotion, not very far from an epic of U2. This song of Ray’s is divinely accompanied by the battery while rolling, a true hug. Rain, ballade mid tempo highlights a voice that swallows words while evolving with instruments. New emotional charge with Willow Street played in acoustic with voice at the SPRINGSTEEN, John COUGAR MELLENCAMP. We adhere in passing a very good time while Ray has half-mast the punk side. Very positive result.”

“I thought I didn’t know who Mark Duda was until I remembered hearing ‘Sons of Downton’ from his band The Handful back in 2015. I quite liked that. It was old fashioned seventies guitar rock with guest appearances from the likes of Bobby Rondinelli (Blue Oyster Cult, Rainbow, Black Sabbath), Jimi K. Bones on guitar (Joan Jett, Blondie) and Cheetah Chrome (Dead Boys).

But why mess with something that works and this EP (yes, three in a row) is enjoyable. The half a dozen tracks on offer are well written and played with the opening “Month Of Sundays” getting things underway in fine fettle. The brass enhanced “Standoff Love” is a real highlight and with only “Worse For Wear” failing to score on the repeat-omoter it’s a win for Mr Duda.”

Month Of Sundays was released on April 14, 2017 through True Rock.

To order Month of Sundays on iTunes please visit: http://smarturl.it/markduda

To order Month of Sundays on Bandcamp please visit: https://markduda.bandcamp.com/

To Listen on Spotify: https://open.spotify.com/album/5XLAxaFFVOLJCow52TN5nd

To Order on Amazon: https://www.amazon.com/Month-Sundays-EP-Mark-Duda 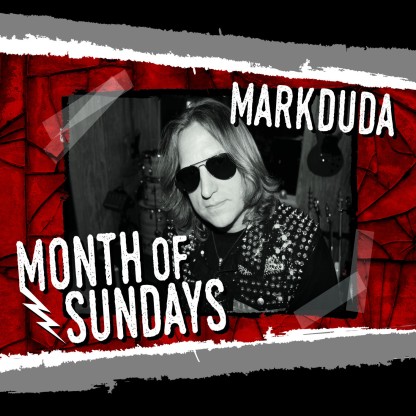 New York Rock and Roll singer Mark Duda has been working with various names we know so well. New York Dolls, Dead Boys.. plenty that we see around a lot as inspiration for a new generation. Now it is time for the release of an album on his own name. “Month of Sundays” is out now.

This album is an interesting mix of classic rock and Punk, all the good from the past carried in a 2017 jacket. A vibrant feel of party and nightlife comes when this release is spinning, a warm touch of nostalgia and maybe more a reminder of a Saturday night rather than the Sunday the title speaks of, but perhaps that is just depending the way you interpretate that.
A bunch of musicians joined in to make the sound complete; Thommy Price, Kenny Aaronson Bobby Rondinelli and Cheetah Chrome for example, a list that gives you w fair idea of what to expect.

Altogether the album sounds like a celebration, an album that is made with the heart sincere passion. It sounds like they had a lot of fun making it and that is contagious when listening to the album. All skillful musicians come together, and it works well for “Month of Sundays”.

Month Of Sundays was released on April 14, 2017 through True Rock.

To order Month of Sundays on iTunes please visit: http://smarturl.it/markduda

To order Month of Sundays on Bandcamp please visit: https://markduda.bandcamp.com/

To Listen on Spotify: https://open.spotify.com/album/5XLAxaFFVOLJCow52TN5nd

To Order on Amazon: https://www.amazon.com/Month-Sundays-EP-Mark-Duda