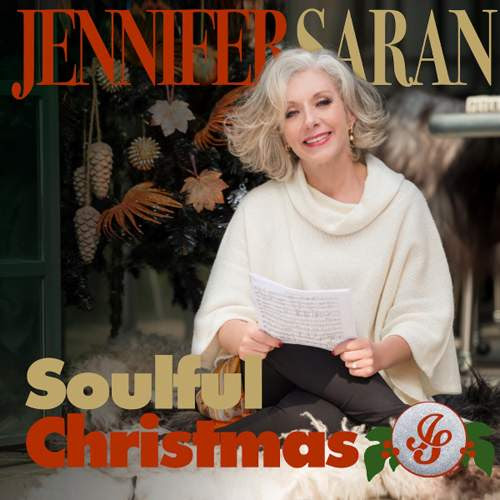 Another box of Yuletide presents from American songstress who asked us to wake up and walk with her.

Apparently 2015’s “Merry Christmas, You Are Loved” was so auspicious a debut for Ms Saran that, two years down the line, she’s returning to the same place. The homecoming theme runs throughout this record, yet if the place it’s in is the same, it’s a different performer we meet here: more confident, creatively matured and, well, finely seasoned. Most of what’s on offer now, may accompany a quiet evening in front of a fireplace, though, pieces like “I Have My Own Reindeer” oozing a family atmosphere, and still, there are moments that prompt one to shake comfortable numbness and let joy flow to the world.

An epitome of the album’s spirit, opener “Christmas Lover” – that marries Saran’s deliberately wintry, transparent vocals to THE TEMPTATIONS’ eggnog-thick voices – is where contemporary grooves feed into communal tradition, while the “baby, baby” of the title track links Jennifer’s soft seasonal wonderment to the spirit of Smokey’s miracles. Playful and elegant at the same time on the jazzy perennial “Sleigh Ride,” she’s embracing a too by-numbers music hall on “Swingin’ At Christmas Time” so, for all their lighthearted throb, the dance types of “Christmas Delight” – a perky duet with Cornell Carter – and “Merry Christmas To You” work better than simple ballads.

It’s a revue of sorts, instrumental interludes of tunes such as “Hark The Herald Angels Sing” peppering up the songs’ flow and an a cappella snippet of “You Are My Christmas Star” shaping a triumphant finale. Yet the bluegrass vibe and beats make “Soul Cake” genuinely special – reserved, if  irresistibly infectious – with a “God Rest Ye Merry Gentlemen” quote an icing on it all. There’s an impression that, had Ms Saran and her mentor, Narada Michael Wallden, let their hair down and let all these strings and brass kick in, they’d have a hit on their hands… but then, it’s Christmas and a time to relax.

Soulful Christmas (JENNIFER SARAN)
(2017, Tarpan Records)
Jennifer Saran must really like Christmas because Soulful Christmas and already her second record on the theme, after the 2015 debut entitled Merry Christmas, You Are Loved. This is also the second release by the North American singer based in Hong Kong this year. Soulful Christmas is a soft disc, with frequent resources to soul elements of Motown (up to here collaborate the Temptations in the theme Christmas Lover). An album with beautiful melodies and to be enjoyed with family during the Christmas dinner. [4.6 / 6]

American singer Jennifer Saran lives in Hong Kong. Jennifer was born as Jennifer Hill in Washington DC, but spent her childhood in Chicago. Soon her voice was noticed, after which she went to boarding school in Switzerland. There too she sang in the choir. Then she moved to Alexandria, and later to Cairo. Although she dreamed of singing, she stayed away from music, married, raised children, moved to the Philippines, Singapore and finally Hong Kong. In 1992 she joined a choir as a mezzo-soprano. Five years latershe set up a choir herself with a few other members. In 2015 her debut album ‘Merry Christmas, You Are Loved’ was released. The following year she released the successor ‘Walk With Me’, both produced and co-written with the legendary Grammy and Emmy winning Narada Michael Walden, whom you may still know from collaborations with, among others, Whitney Houston, Mariah Carey, Aretha Franklin, Sting, George Michael etc. In the summer of last year Jennifer added the single ‘Wake Up’, together with the South African choir Ladysmith Black Mambazo and guest star Carlos Santana. This single came from her third album ‘Wake Up’, which came on the market last summer.

And now another Christmas CD has been released, with the double single ‘Soulful Christmas’ / ‘Merry Christmas to You’. But first and foremost is the atmospheric single ‘Christmas Lover’, on which none other than the legendary Temptations sing along. The classic ‘Sleigh Ride’ gets a swinging jazz arrangement, and there are also a lot of beautiful, original tracks, which she wrote together with Narada. For example, the “traditional” ‘Soul Cake’ is dedicated to Sting. Furthermore an instrumental cover of ‘Hark the Herald Angels Sing’ and of ‘Frosty the Snow Man’. And on ‘Christmas Delight’ Cornell sings “CC” Carter. There is already a jazz CD in the pipeline, which should be released in the spring of 2018. A very nice, soulful Christmas CD!

Saran’s 2015 holiday album Merry Christmas, You Are Loved was so successful that here she is quickly back with a new set of standards and originals. As with Merry Christmas, Saran again teams up with Narada Michael Walden who co-writes, produces and plays various instruments throughout, and he does all of those things on opening track “Christmas Lover,” a cut that features the legendary Temptations. The song is a slow jam that’s custom made for a hold-me-tight dance under the mistletoe or snuggling on the couch. “Sleigh Bells” is a jazzy ride embellished with a horn section, “Swinging at Christmas Time” moves to a finger-popping beat and girl group recalling vocals while the album’s title cut is a quiet, R&B-flavored pop cut that revels in the joy of spending the holiday with a special lover. Saran also has fun with a take on the traditional cut “Soul Cake” which she dedicates to Sting, and perhaps the best of her co-writes with Walden, the sensual “Where Are You Christmas.” Get it here.

Yes, the Christmas tree has been taken out of the box and the lights, balls and garlands shine like never before, because that atmospheric period of the year has already surfaced: ‘It’s Christmas time’. And so it is time for records with Christmas songs, something that many artists in their musical career at least once venture. With the well-known Narada Michael Walden as producer and arranger in the recording studio, the American singer and songwriter Jennifer Saran, who lives in Hong Kong, has also gone to sing and record Christmas songs.

For her, however, this was not the first time, because in 2015 her record “Merry Christmas, You Are Loved” already appeared on the market and the success of that album has now led to the release of the latest album “Soulful Christmas”. For this album Jennifer Saran has composed eleven new songs, of which we will remember “Long Road Home For Christmas”, album title track “Soulful Christmas” and the ballads “Where Are You Christmas” and “One More Christmas Together”.

“Christmas Lover” (see lyrics video), the opener of this album, is also such a self-written soul song by Jennifer Saran and Narada Michael Walden. It starts with a so-called ‘ghost intro’ of Dr. Otis Williams, after which Jennifer brings the song together with his famous ‘Motown’ soul group ‘The Temptations’. In addition, three striking disco songs can be found on this album with “Merry Christmas To You”, the “Christmas Delight” and “You Are My Christmas Star” sung together with Cornell ‘CC’ Carter.

All of these own songs were supplemented here with six other Christmas songs and some not so well-known covers of traditionals such as “Sleigh Ride” and the rhythmic “Soul Cake (Dedicated To Sting)” that was once performed live by this singer of ‘The Police’. brought. In between we also get two short instrumental intermezzos with the “Coventry Carol” from the 16th century and the “Hark The Herald Angels Sing” composed in 1739.

Finally, we also want to say that we have been able to review this mother of three children here a few times, including last year through her participation in the project with Ladysmith Black Mambazo, Narada Michael Walden and Carlos Santana that led to the single ” Wake Up “and the last studio album of the same name in the middle of 2017. The year before we were also able to talk with a lot of praise about her previous studio album” Walk With Me “. With this Christmas album, Jennifer Saran seems to want to create a gift for all her fans and as far as we are concerned this may be done as a thank you at this time of the year.